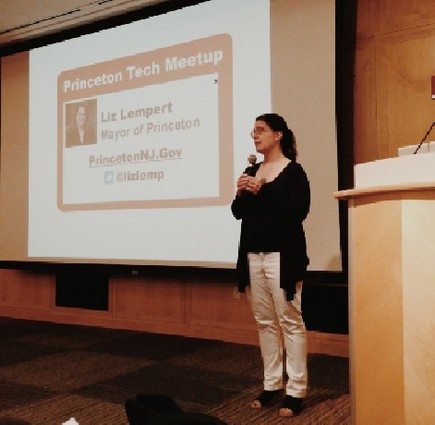 Liz Lempert, the mayor of Princeton, attended the August 27, 2013, Princeton Tech Meetup, at the Princeton Public Library, to talk to her constituents. Her remarks centered mostly on Princeton’s historic consolidation — it was the first New Jersey town to consolidate in over 100 years — but she did have a few things to say about the town as a tech startup hub.

Mayor Lempert has a tech background herself. She grew up in the San Francisco Bay Area and attended Stanford, majoring in symbolic systems (in the cognitive science field). After graduating she worked in the computer industry, on an artificial intelligence project called CYC, to try to imbue computers with common sense. However, Lempert didn’t stay in tech for long, making the transition to science broadcast journalism. Finally, after moving around a while, she wound up in Princeton and began to participate in government there.

Princeton Township and Princeton Borough officially merged on January 1, 2013, and Lempert was on the team that had promoted the consolidation. “Really small governments are not the most efficient way to do business,” she explained. “We made the case that by combining the two governments we could save on taxes and actually improve services we were delivering to the two communities.”

Lempert pointed out that since consolidation, the government has made modest tax cuts and trash pickup has been extended to the whole town. It has also been able to bring back police services that had been cut in previous years, she said.

“I think that consolidation in Princeton created a kind of sea change here. I think we are beginning to see ourselves as innovators on the government level and on the environmental level. … We’ve had the first curbside composting program in New Jersey.

“We are excited in being innovative in technology as well, through Tigerlabs, through library programs like this, and we won an award last week from Google, naming Princeton the digital capital of New Jersey. We are proud of that,” Lempert continued. She noted that Princeton is forming an economic development task force that will be getting off the ground next year.

An audience member asked Lempert if there was anything she could envision the municipal government doing to make the area more attractive to startups. The mayor threw the question back to the community. “It seems to me there is a domino effect. You get a few successes and you get a reputation as a place to be, and then more people will come here to do their startup.”

This is partly a municipal issue, she noted, adding that the town “should also look at it regionally, with the local mayors [of nearby towns]. One of the local concerns is Trenton, and there is huge potential in that city. … You want to start your startup where you can get really cheap space, and if you have young people, they can live in a place that’s a little funky. Princeton can’t be everything. We are a place where we have great universities. We want to make it easy for businesses, to the degree that we can, to start up here, but there’s a limit to how affordable we can make things here, and that’s just the reality,” she told the group.

Janie Hermann, a public programming librarian at the library, also spoke to the group. “I’m so happy that the tech meetup has taken off the way that it has at the library,” she told the crowd. “I was approached by Venu [Moola] and Chris [Boraski] about a year and a half ago, and we floated around a two-month trial. Well, what a success!”

The library has had success in additional technology programming and outreach. It hosts Macintosh Users’ Group outreach to the community and a meeting of the Python User Group on Monday nights. It is also hosting Drupal coworking on Fridays. [We learned after Hermann’s talk that the Einstein Alley Entrepreneur Collaborative is launching an entrepreneurship book club that will meet there.]

All the programming has helped the library receive the Library of the Future award from the American Library Association, Hermann noted.

“Our proposal was called ‘community collaboration for enhanced technology services,’ and our goal was to leverage the community’s talent and provide an opportunity for professional relationships within the technology community,” she said.

Princeton has different problems than those of most libraries, Hermann explained. Many libraries have to teach their patrons how to use email and other basic services. “But this is not our problem …we have a technologically savvy community here. Princeton is an innovation hub,” she said.

Hermann explained that the librarians in Princeton go to South by Southwest (SXSW) every year to raise awareness of 21st-century libraries and what they are doing to innovate. This year, Princeton Tech Meetup organizer Moola and Hermann submitted a proposal to host a panel discussion on how libraries can be the new “startup garage.”

“Here in Princeton, the library staff is holding several meetings to see what we can do further to help the startup community,” Hermann said, adding, “We have classes coming up in the fall on Arduino, Raspberry Pi and Evernote. We are really trying to bring things to the next level and create a space where people can come in and learn about the hot topics in technology.”