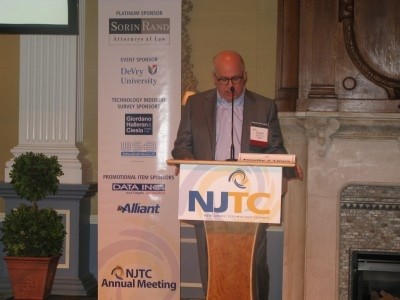 David Sorin moderated the discussions at the NJTC annual meeting in July. | NJTC

The New Jersey Tech Council (NJTC) tried out an unconventional format at its annual meeting July 18, 2013. Participants were asked to sit down for lunch at a table where a topic of particular interest to the tech community would be discussed. A thought leader was stationed at each table to facilitate the conversation.

Some of the most interesting discussions centered on observed changes in how knowledge workers get work done these days, including the influence of mobile. With these discussions the NJTC is acknowledging that coworking and cost cutting have had effects, for better or worse, on the IT workforce and even on the real estate market as we know it.

David Sorin of SorinRand (East Brunswick), who moderated the event, pointed out that companies are becoming less “land intensive,” with more work occurring remotely. Big, stable company spaces are going to be needed less, he said, adding, “We have to figure out what we are going to do about this.”

A table devoted to conferencing and collaboration applications, hosted by Tonya Turner, account director of collaboration services for Level 3 Communications (Broomfield, Colo.), discussed the new reality. “Our table’s priority addressed the paradigm shift for all knowledge workers who are being asked to do more with less,” she said in a summary. Those workers are subject to increased goals and workloads and a decrease in overall IT support within most companies.

Surprisingly, the table didn’t come up with a pat solution for implementing collaboration tools. “We were in agreement that we need to understand the needs of our knowledge workers prior to deploying conferencing tools,” Turner said. Companies should work with vendors that have one source for these tools and offer ongoing training and support, she added.

A table on coworking, led by Gregory Dell’Aquila of Mission 50 (Hoboken), first defined coworking and how it differs from executive suites and business centers. “Coworking spaces typically don’t provide the same level of administrative/secretarial support that executive suites provide,” Dell’Aquila said. “The key differences that make coworking spaces unique are the community and collaboration that exist,” he noted.

Those at the table concluded that the increase in knowledge-based companies combined with the lack of traditional offices has heightened the demand for collaborative workspaces. Coworking spaces have evolved in the shared office space market due to this shift in the way people work. Knowledge-based companies in the tech sector are thriving in this new type of office, the participants acknowledged.

Highlights from some other discussions that occurred at the meeting:

Those seated at the table on early-stage/angel investments, led by Steve Dyer, chairman of Jumpstart NJ Angel Network (Mount Laurel), concluded that while many exciting developments, ideas and research are occurring at New Jersey universities, meetups and elsewhere, the state would benefit from taking those ideas to sources of angel capital. This table concluded that N.J. needs more angels, as those with great ideas often cannot find capital.

The patent law table was headed by thought leaders Rich Goldstein and Roman Tsibulevskiy of Goldstein Patent Law (Cranford). Participants discussed when and whether a company should use a provisional patent application to save on initial costs, what subject material is patentable and how to develop an effective intellectual property strategy.

In a summary of their remarks, the table’s leaders cited a lesson stemming from their discussion: it is important to weigh the value of a patent at different levels of development. For instance, a startup developing a mobile app only a few weeks into development would have a completely different strategy than a company that has received a substantial amount of funding, they noted. A key point: get a patent attorney involved from the beginning to avoid making potentially expensive mistakes.

This table, led by Shaun Bodrog, senior business development manager at Constellation Energy (Baltimore), looked at energy efficiency solutions with no upfront capital expenditures, such as the Efficiency Made Easy program advanced by Constellation. Its conclusion: education is the first step in allowing business decision makers to evaluate their opportunities and identify shortfalls in the way they control their energy costs.

Charged with studying the voluminous requirements imposed on employers who sponsor group health plans under the Affordable Care Act (ACA), this table, led by Michelle Capezza and Gretchen Harders of Epstein Becker Green (New York), focused on “prudent, ongoing recordkeeping and proper plan documentation.” Some employer-reporting requirements have been delayed until 2014, but the discussion leaders noted that many other aspects of the law will become effective in 2014 or are already effective.

According to this table, tech companies weighing the pros and cons of offering compliant health programs to their employees as a part of an overall benefit program should assess the importance of benefits as a tool to attract and retain employees in a competitive industry. The table concluded that employers who sponsor group health plans must ensure that those administering the plans have the required knowledge and expertise to maintain them in a complex environment.

Rep and Warranty Insurance to Close the Deal for M&A

Dan McGrath of Maloy Risk Services (Princeton) led this table’s discussion. Mergers and acquisitions are a frequently used exit platform for tech companies, especially as the IPO market continues to struggle. However, to be acquired, companies have to overcome stringent indemnification and escrow provisions. Sometimes they can’t, and that kills the deal. This table discussed how purchasing rep and warranty insurance can minimize or eliminate much of the exposure for both buyer and seller.