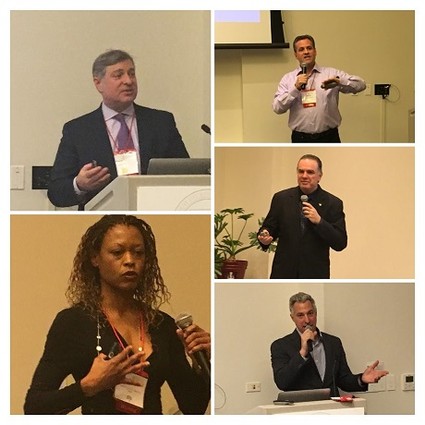 The meeting, entitled “Overcoming Challenges in Growing a Successful Business,” was held on February 8 at the Fairleigh Dickenson University campus in Madison.

The speakers focused on topics such as bootstrapping, accounting and legal matters, company culture, sales and marketing and other nuts-and-bolts business issues that could sound the death knell for young companies if they are ignored or not properly addressed.

Success can be highly elusive for many wannabe tech tycoons. According to a report released last year by the Statistic Brain Research Institute on startup failure rates, an estimated 50 percent of businesses go under by the fourth year of their existence. The report said that the IT industry had the lowest survival rate (37 percent), while the financial, insurance and real estate sectors had the highest (58 percent).

The report cited numerous factors that lead to businesses closing their doors forever, including incompetence, little or no management experience, lack of adequate funding resources and the absence of any strategic direction.

Build people, and the people build the business, Sloan says.

To help beat the odds of business failure, Sloan thinks that startup companies might want to follow the advice of business guru Zig Ziglar: “You don’t build a business, you build people, and the people build the business.”

So what are the first steps that startup founders should take on what will likely be a long and rocky entrepreneurial journey?

Some consider bootstrapping as the best way to run a company in its infancy. That might mean financing the company with personal savings, as obtaining a bank loan or other outside funding can be extremely difficult, especially for those who don’t have any experience in starting or running a company.

While there is plenty of money available for investment in companies, those funds are typically targeted at companies higher up on the growth curve. So rather than banging on the doors of venture capitalists and other investors, Carini recommended that startups fly solo on funding their ideas. “Just suck it up and do it yourself.”

If getting a company up and running will take more than what’s stashed in your bank account, Carini suggested finding customers “before you even have a business,” as they could provide the much-needed revenue for funding your company’s growth.

Another important aspect of bootstrapping is keeping a tight rein on expenses. Carini noted that cash-starved startups can always find cheaper ways to run their companies, especially in such areas of staffing, IT infrastructure, marketing and other key business functions.

Ripp agreed with Carini that the funding of startup companies, or of those under $500,000 in annual revenue, should come out of the founders’ pockets; or family and friends could contribute to the fledgling business. Outside investments usually don’t become available to startups until a minimum of six months to one year after their inception, Ripp noted.  “If you’re under $500,000, don’t go looking for venture capitalists.”

Startup founders should use their profits to propel the company’s growth, not for personal expenses. “When you put money in the company, don’t expect to take it out,” he said.

As the startup hopefully evolves into an early-growth company ($500,000 to $1 million in revenue) and eventually becomes a high-growth company ($2 million to $10 million in revenue), more money goes towards sales, marketing and overhead, and less towards product development. Ripp added that companies in these later stages of growth should concentrate more on forecasting their cash flow and other ways of tracking revenue growth.

Start-up entrepreneurs must also pay strict attention to setting up agreements designed to protect their companies from intellectual property theft and other problems that could cause serious harm to a young company.

One of the biggest problems that startups run into is the failure to include timelines in their agreements with shareholders, vendors and others.  Startups “have to be reminded that this is an important piece of getting your house in order,” Gearhart said. “They need to make sure they have an agreement on when it’s going to get done and what are the consequences if it doesn’t get done.”

While entrepreneurs are generally blessed with a high level of intelligence, creativity and energy, some lack what Hilcken refers to as a “mindset of selling.”  Without it, startups will most likely join the ranks of other failed companies that didn’t embrace this as a top priority for growth.

Hilcken said that startups need a “checkup from the neck up” if they want their business ventures to succeed. That means they must make every effort to learn what makes their customers tick.

“You can employ all of the sales techniques in the world, but your company won’t obtain the desired results unless you understand the behavior of your customers,” he said.

To sharpen their selling skills, Hilcken suggested that entrepreneurs adopt such tactics as using only positive words in their sales pitches, participating in public speaking events and writing short statements that “make you feel good.”

Both first-time and seasoned entrepreneurs starting a company must understand that it takes a lot more than creating a great product or service to overcome the challenges of running a successful business.  Gearhart couldn’t agree more: “Everybody has lessons to learn in this game.”

Previous: NJ EDA Panelists Give Tips on Raising Funds at the Founders & Funders “All Stars” Event
Next: Audible Gives Gifts of Audiobooks and Tablets to Newark Students at East Side High Event