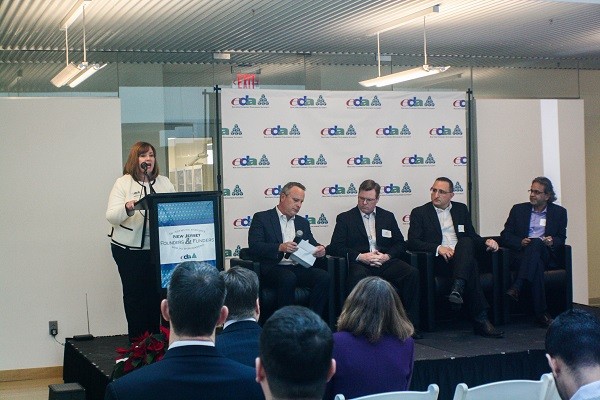 The New Jersey Economic Development Authority (EDA) brought together a panel of entrepreneurs who had benefitted from EDA funding at its Founders & Funders “All Stars” event in December.

Moderated by Kathleen Coviello, EDA vice president, technology and life sciences investments, the panel discussed the realities of raising money from the entrepreneur’s point of view. “When folks say there is no money to be found, this panel can speak to this directly,” she told the entrepreneurs assembled there.

The panelists included Fred Dirla, Rick Kushel, Dennis O’Dowd and Ashish Vengsarkar. Dirla is the founder and CEO of Austere Solutions (Bridgewater), and was formerly cofounder and CEO of FieldView Solutions (Edison). FieldView was the first company to receive financing from the EDA through New Jersey’s Edison Innovation Green Growth Fund when it closed on a $1 million growth capital loan in 2012.

Kushel, CEO of DealCloud (Hoboken), was formerly chairman and CEO of Archive Systems (Fairfield), which had been approved by the EDA for a $1 million investment from the Edison Innovation Fund to help the company develop digital infrastructure. Archive Systems later received more than $20 million in venture capital from The Carlyle Group (Washington, D.C.) and the EDA-supported Edison Ventures (Lawrenceville) and NJTC Venture funds.

O’Dowd, a partner at Crosswalk Ventures (Albany, N.Y.), was formerly CFO of Ivy Sports Medicine, where he secured multiple financing rounds, including a successful partnership with the EDA.

Vengsarkar is the CEO of Nistica (Bridgewater), a supplier of optical subsystems that power telecommunications networks. Nistica had received a $1 million investment from the EDA through the Edison Innovation Fund.

Raising money always takes longer than you think it will. “You are always optimistic. The reason you are an entrepreneur is because you believe in your company and you also believe that the money will come,” Vengsarkar said.

Make sure you track your milestones. Vengsarkar noted that his investors had said that they would give the company $3.5 million, but at the last minute said they’d provide only $1.75 million to get the company to the next milestone.

You’ll spend 200 percent of your time on fundraising. Be tenacious. It’s a marathon.

You have to be the consummate cheerleader for your organization and team while you are fundraising. They don’t want to see you struggling to raise money while you are trying to drive R&D or company sales. Dirla noted that in 2007, after raising FieldView’s first round of funding, “We kept a Series A round open for three years. I felt like I was raising funding for about 30 years.”

Once you have money in hand, you are still fundraising and getting to the next round, but you have to keep folks focused on what they are doing from an operational standpoint. “We spent a large part of our time raising money so that the rest of the company could do what they needed to do,” said Kushel.

There are things you can do to help streamline the process. This was from Dennis O’Dowd, who added that you should have your due diligence in order, your house as a whole in order. For example, pick the right legal counsel: firms that specialize in investments, not your neighborhood lawyer. Depending on the stage and size of your company, if you have the right staff, that will go a long way. Make sure you have a good CFO and a good sales team.

Have your business model tightened up when you are giving your pitches. By doing this, you can get right to the point about your vision and where you are taking the company.

Make sure you know when the venture fund is going to run out. Fund investors need to be paid at some point you could be forced to sell your company.

It’s not always about the valuation; it’s often about the terms of the deal. This was stated by Kushel. O’Dowd added that you shouldn’t get hung up on one or two terms, but take a look at the entire set of terms to see if they work for you. Having the right advisers is important during this time to make sure you are left with money in your pocket or that you will know how the terms will affect you when you want to raise a Series B round.