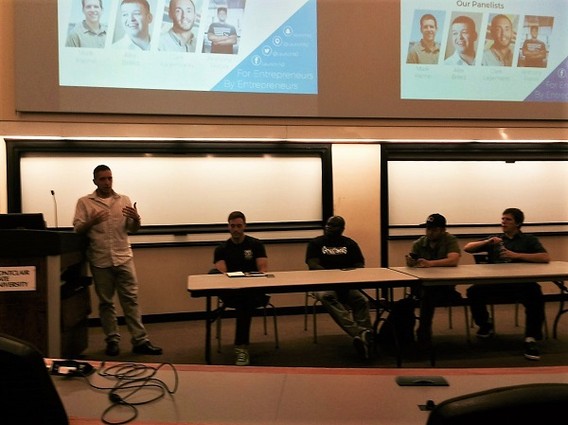 Between conceiving an idea for a hot, new product and turning it into a profitable venture, there should be a process to help companies avoid costly mistakes along the way.

That process exists, and it’s called the “Lean Startup.” An introduction to this method was presented at a Launch NJ meetup on June 22 at Montclair State University.

During the presentation, called “Building Business the Lean Way – A Tech and Entrepreneurial Discussion,” adherents to this business philosophy discussed how it saves time, money and energy in building a company, and how it also increases the likelihood that a business will prosper amid various market challenges.

They discussed the principles championed by entrepreneur Eric Ries, who introduced the Lean Startup system and wrote a book about it that made the New York Times best-seller list. In his book, The Lean Startup: How Today’s Entrepreneurs Use Continuous Innovation to Create Radically Successful Businesses

, Ries, a serial entrepreneur who has had his share of startup failures, says that companies can shorten their product-development cycles by putting more time into iteratively creating products or services that meet customer demand. This, in turn, will minimize market risks and lessen the incidence of product launches that go nowhere.

This philosophy actually has its origins in the decades-old concept of lean manufacturing, a system that seeks to eliminate all activities that do not create value for customers.

The speakers said that their companies adhered to the Lean Startup build, measure and learn system during the development cycle. This system enables companies to determine their effectiveness by their ability to develop ideas, how quickly they can build a viable product based on that idea, how well they’re able to track a new product’s value in the market and by how much they can learn from each experience.

Britez’s company, which is one of the world’s largest publishers, follows a key Lean Startup principle by building prototypes of educational products after receiving feedback from instructors and students.

“This process gives us a vision of what the product will be,” Britez said. “It allows you to question yourself and put your ideas through the ringer.”

One of the Lean Startup’s basic principles that Lagemann follows is something that all businesses should abide by: know thy customer.

For Lagemann, that meant placing ads on Craig’s List asking people to respond to a series of questions about his product. He took this approach because he felt that only strangers would provide unbiased feedback on his product, a necessity when trying to accurately gauge customer demand for a new product or service.

Frasier had a similar approach: he found early customers by placing ads on Facebook, sometimes for a product that didn’t exist. He even had a buy button in his ads, to see if people were actually interested in his idea.

But Frasier thinks the best way to really know what features customers want in a product is to pose the question: “If you had a magic wand and could snap your fingers and make it much better, what would it be?”

Another key Lean Startup principle is that companies should take a different course of action if the product isn’t attracting the desired customer demand, a move otherwise known as “pivoting.”

In his book, Ries used the e-commerce company Groupon as an example of pivoting. In its early days, the company failed to make any headway when it was an online activism platform. The company’s founders then started a blog and offered a coupon promotion for a pizzeria in its building.

Although the promotion only received a small number of redemptions, the company realized that it was on to something significant. A few years later, Groupon joined the ranks of the tech unicorns — those with valuations of over $1 billion.

During its startup days, Yashi veered from its original identity as a video game platform, a wise move that eventually led to the nine-year-old company being acquired for more than $30 million in 2015.

“We pivoted so many times until we found our core product,” said Paone, whose company grew from fewer than 10 employees crammed inside a small office, when he first joined, to about 60 employees with offices nationwide.

Instead of asking customers what they like about its platform, Yashi will ask them what they don’t like about their competitors’ platforms. This information “helps us build a better product,” Paone said.

Britez said it shouldn’t take a long time to know if a product is destined to become a success or a flop.

He recalled an educational conference he had attended where he didn’t have a product to show to the instructors and students attending the event. So he created a product in two days that he thought would appeal to the conference attendees.

But his hopes for the new product were quickly dashed after some of the attendees gave him negative feedback. “It was a terrible idea,” Britez said. But that exercise saved him and his team from spending countless hours and money on a something that wouldn’t have worked out.