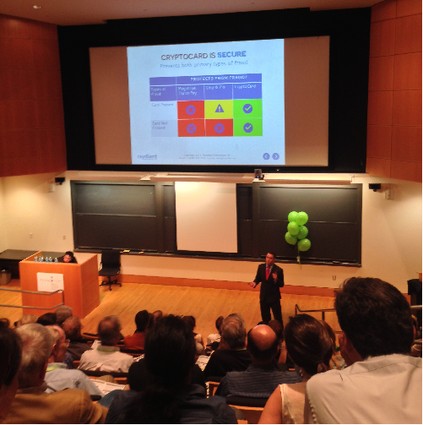 Some of Princeton University’s most ambitious engineers and entrepreneurs presented products and business ideas developed over 10 weeks as part of the school’s Keller Center’s eLab Summer Accelerator Program.

Seven teams of undergraduate and graduate students pitched their products at the eLab Demo Day at the Keller Center on Monday, August 11. This article will cover four of the teams who presented.

CryptoCard is a secure payment system to combat credit card fraud. Credit card companies will give the card to consumers for everyday purchases. Issuing banks will verify each purchase using CryptoCard’s servers.

Rather than using the standard 16-digit code stamped on the front of a regular credit card, CryptoCard will have an e-ink display that presents a new pseudo-random number every 60 seconds. “If you make a transaction at 5:33 p.m. and someone stole your information at 5:33 p.m. and somebody copies that credit card number down, at 5:34 p.m., if they use that same number, it’s expired. It’s completely useless to a fraudster,” said John Wolfe of Raydiant Enterprises LLC.

Wolfe and Raydiant team member Eric Rehe began their presentation by demonstrating how easy it is to commit credit card fraud. Using a credit card lent by an audience member, Rehe swiped the credit card into a card reader that copied the contents of the card and rewrote it onto a different empty card. A potential fraudster could then use the new card to make purchases with the victim’s bank account. Credit card companies lose $8 billion a year and customer satisfaction due to credit card fraud.

The most important feature of their system, according to Wolfe, is that it can be integrated seamlessly into the United States’ current payment structure. “We can put this product on the street tomorrow and no one will have to change any behavior except us,” he said.

Wolfe said their customers will be card companies who will outsource purchase verification to CryptoCard’s back-end server. Should an old card number be used to make a transaction, CryptoCard’s servers will know potential fraud is being committed and the time and place it is happening. Revenue will be generated by charging card companies $1 for every $3 of fraud saved.

Raydiant will launch the pilot program in January 2015.

Deià is a fashion brand that offers luxury clothing and accessories for woman made ethically by artisans from around the world at an affordable price.

Starting from the premise that clothing serves as a kind of universal language between people expressing our personal values and stories, Deià team member Meg Partridge asks, “What is the story you want to tell?”

Much of the clothing purchased comes from countries with poor working conditions and scant wages for the workers. “In India alone, more than 7 million handicraft artisans form the backbone of the rural economy. Yet they struggle to compete with cheap machine-made imitations and are forced to sell through middlemen who drive them into debt,” Partridge said.

She points to a trend among consumers looking to purchase more ethically produced handmade products like whole-foods products. She also mentions an apparent void between high-end luxury products and cheaper “statement pieces” that emphasize charity, but that an everyday working woman may not be allowed to wear in the corporate environment.

“Nobody is addressing the lucrative opportunity for beautifully crafted wearable clothing and accessories that are everyday luxuries for the modern woman on the go,” she said. Deià will offer limited-edition “capsule collections” of clothing and accessories direct to customers. They will also work to help improve the standard of living for their artisan partners through charitable causes.

Deià is scheduled to ship its first capsule collection in summer 2015.

SpaceTouch engineer Yingzhe (Dylan) Hu presented a 3D gesture interface that can be implemented into a wide range of consumer products.

He said gestures can be applied in gaming, automotive and medical fields. Current 3D gesture systems are unintuitive. A user may interact with a 3D sensor that does not properly sync between their natural motions and the display they are interacting with. This is because current technology is camera-based, offering a limited sight of view on the display.

SpaceTouch’s technology will allow users to interact with the display directly as if they were manipulating a real physical object. Hu said this can be achieved by embedding a 3D sensing chip that he and his team developed at Princeton into a display ranging from 13 inches to 50 inches in size. All of this can be done at a lower cost than their competitors, he said.

Hu said the product will generate revenue through licensing deals with large corporations and by offering the technology directly to consumers to mount on their own displays at home.

SpaceTouch will ship the product in 2015.

Solstice Initiative is a nonprofit organization looking to expand access to affordable solar power to every household in the country. The group seeks to make solar power a part of an employee benefit package.

Founder Steve Moilanen said that most people his team surveyed want to go solar, but that many have no access to it for a variety of reasons. Moilanen used the example of Ikea, which has installed solar panels on most of their facilities and could theoretically dedicate a portion of the array to their workforce. The Solstice Initiative can approach Ikea and develop benefits packages based on the size of the array and their workforce, and approach local utilities providers to make sure an employee’s solar investment shows up on their utility bills.

Moilanen said his group will also help to market the corporation’s benefits package to the community to show that they are an environmentally friendly company.

Their revenue model will be based on providing benefits to workers and by partnering with companies who are looking to install solar panels at their buildings.