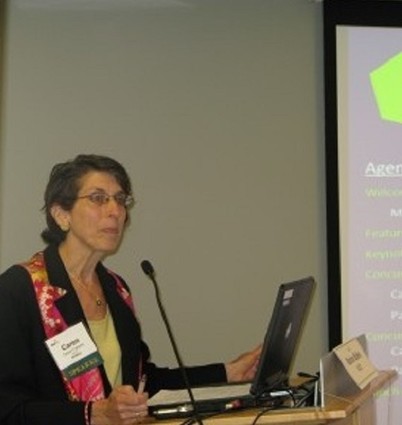 In late January, Caren Franzini passed away. Franzini was the former CEO of the New Jersey Economic Development Authority, holding that post from 1994 to 2012. During her term of office, she navigated  some very tough times for the New Jersey tech and life sciences community, remained a friend to New Jersey tech companies and their founders and implemented many creative programs.

Here is what some members of the New Jersey tech community who knew Franzini had to say about her:

Kathleen Coviello, director of the Technology & Life Sciences Division of the EDA

“For those of us who knew, loved and respected Caren, there is no better way to offer a quote about Caren than to follow her legacy of “three.” (Caren always gave three examples when speaking).

“I had the great fortune of knowing Caren for over 20 years.  She has inspired me on a regular basis to build bridges and to be open to new ideas.  I had the tremendous honor of calling her my leader, mentor and friend.  She will be sorely missed, but never forgotten.”

“We have lost perhaps the state’s most effective modern leader. Any doubts I had were erased as I heard the moving speakers at her very crowded memorial service. In addition to making so much happen on the economic development front, she was so important to the Tech Council, from its formation in 1996 to its sustained growth, to the launch of both the angel investor network and our venture fund. Caren was also a friend and mentor to me. I deeply regret not spending more time gaining her insights and strengthening our friendship.”

“I met Caren in the early 1990s, when she had just joined the New Jersey EDA. I first recall her commitment in creating a committee to support and mentor seed-stage companies. We met at the original RCA facility in Princeton, which is now Sarnoff. Dealing with Caren was just as pleasurable then as it was after her taking over the leadership of the EDA. I always admired her for putting the interests of the New Jersey economy before any political agendas.

“She navigated through seven governors, always with the conviction that her priority was the economic growth of New Jersey. I had the pleasure of serving on several nonprofit boards where her soft-spoken voice was always listened to and respected. On several occasions I would call her for advice, and she was always generous with her time and honest with her opinions.

“On one specific occasion, Caren had just taken over the leadership of the EDA and I wanted to introduce her to the Research & Development Council of New Jersey. Her reaction was open-minded and immediate, which lead to the EDA’s involvement in the Council. She was very approachable and dedicated to her job. Caren was a wonderful person and a fierce advocate of the New Jersey economy as well as small business. She will be sorely missed.”

“Caren Franzini truly was one of those rare combinations of a brilliant, passionate, empathetic, caring and nice person. That’s rare to find. She was someone who was a tremendous success and wonderful to be around.  Even when she was ill several years ago, she never made that part of who she was. It never defined her. She was always defined by the great work she was doing throughout New Jersey. Under her leadership, many wonderful things happened in the state. There are never enough resources, but she made the most of the resources available to her and leveraged them. She had really interesting programs that she seeded, or designed, or fostered or nurtured in the state that really helped the ecosystem and continue to help the ecosystem. She left a legacy we all should hope to emulate: that you can be respected and liked and still do good and important work.”

When Franzini resigned from the EDA in 2012, several New Jersey tech community members who had worked with her commented on her tenure for a NJTechWeekly.com article.

Maxine Ballen, founder and CEO of the NJTC, had worked alongside Franzini for years. Speaking to NJTechWeekly.com, she said that Franzini’s resignation was a big loss for NJTC member companies because Franzini was a “great champion for the tech community as well as a friend, resource and ally.

“As you know, we work closely with the EDA,” Ballen added. “Caren has helped keep New Jersey one of the top-tier destination states for technology because of the programs she put in place. Her leadership is the reason New Jersey is regarded the way it is.”

On Franzini’s retirement, Katherine Kish, executive director of Einstein’s Alley, a nonprofit Princeton-area economic development organization that supports the growth of information-technology, life-science and “green” companies, called her a “real point of light through many administrations in New Jersey. She has always been strong, smart, fair, supportive, principled, energetic and a real asset to the state in its economic development infrastructure. I’ve often thought of her as a pragmatic visionary.”