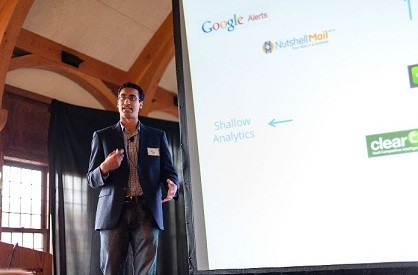 The companies were part of the Tigerlabs summer program, a 12-week tech accelerator aimed at undergraduate student entrepreneurs.

Introducing the group, Bert Navarrete, an experienced investor who, along with Jason Glickman, cofounded Tigerlabs (Princeton) initially as a coworking space, said seven companies made up of 25 students from around the country had participated in the program.

Mentors and advisers helped them with everything from developing and designing their products to assisting with business development and strategy. By Demo Day, 100 percent of all the companies had both live products and some users.

“We’ve had 11 pivots. We’ve had 14 speakers come throughout the summer and meet with the teams over pizza and ravioli, and 241 mentor and adviser meetings,” Navarrete said. “We’ve played 1,314 ping-pong games,” many of them in the middle of the night. Each team slept an average of 5.6 hours a night.

The first presentation came from Princeton University’s Shubhro Saha, cofounder and CEO of Panther Logic (Princeton), a company that aims to “make it dead simple for other companies to track their competitors online.” Saha said Panther’s product is aimed at medium-sized companies. He provided the example of investment portfolio holders who want to track the competitors of the companies they hold but can’t afford a million-dollar experience.

Tracking competition “becomes a problem, because companies are operating in many parts of the Web, including LinkedIn, Facebook and Twitter. … There are people getting hired, changing jobs, getting fired,” Saha said. With that information all over the Web, “the result is a lot of noise,” he noted. Panther provides both a “deep dive and an affordable analytics solution,” he added.

Saha said the product’s “elegant user interface” should help employees at midsized companies learn how to use it faster. Panther includes cofounder and CTO Andrew Cheong, a Princeton grad, and COO Madeleine Foote, a member of Oxford University’s class of 2014.

Next up was the team from TonightLife, a mobile platform that lets users find same-day events. Aimed particularly at the city crowd, the app answers the question, What is going on tonight? There may be a lot going on, but it’s not easy to discover the activities a user wants to attend. In most cases users are overwhelmed by the sheer volume of events, Cesar Devers, CEO, who graduated from Princeton in 2011, said.

Devers provided the example of Live Nation, which often has a large amount of inventory left over when it puts on an event. But people who want to fill those seats might not even know that event is happening. Smaller venues can also use the system to unlock their unsold seats.

“We take out all the noise and let you know what is going on today, this evening,” Devers said. The app has a simple interface: the platform provides suggested events and then drills down to all of them. The mobile device also includes a social aspect, so users can let their friends know about the events they are considering. The company, which will start by serving New York, wants to include special offers and other deals for people who purchase multiple tickets..

Faaez Ul-Haq presented for Phonar, a platform that helps users find assets through location-based technology. The company makes hardware and software that GPS-enables products in the real world. Phonar is planning to work with sneaker manufacturers, for example, to GPS-enable children’s footwear so parents need only use a smartphone to locate a lost child. Parents would find their wandering child by following a clever avatar in an augmented reality (AR) scenario. Ul-Haq said Phonar envisions several other markets for the device and app, including pets, cars, small-businesses equipment and anything that can work with a GPS hardware tracker.

Three of the cofounders, Ul-Haq, Nitin Viswanathan and Hamza Aftab, graduated from Princeton in 2012, and Shreshth Singhal will graduate in 2013. The three are looking for help with H-1B visas so they can remain in and build their company in N.J.

Later this week we will profile the other accelerator companies that pitched at Tigerlabs Demo Day.