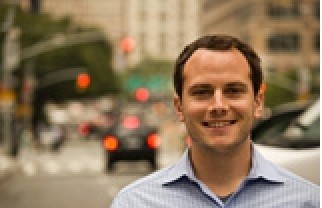 Topping off the annual Asbury Agile event on Oct. 3, 2012 was a “Startup Throwdown” featuring four startups, most of which have New Jersey ties. Each was allotted five minutes to pitch and about two minutes for a Q-and-A session. Attendees voted for the winner. The conference made a donation to Big Brothers Big Sisters of Monmouth & Middlesex Counties in the name of the winning startup, Tivity. Tivity also won three months of free coworking for one individual at the venue Cowerks.

Speaking first was George Burke, of eBookFling.com, who works at the Cowerks space in Asbury Park. A few years ago Burke started BookSwim, which he called a “Netflix for books.” The company’s revenue has grown to $1.1 million, and it has become profitable. However, during the past two years, customers who had been paying $25 per month for reading material have become e-book users.

EBookFling provides a way for people to borrow e-books. Barnes & Noble and Amazon both have book-lending programs. “Once those two companies allowed lending, we could launch an interesting platform,” Burke said. If you have a lending-enabled book, you can lend it out for a 14-day period. You earn a credit by lending a book to someone else in the network or purchasing a credit for $1.99. The system is attractive to customers because books are expensive to buy, he said. Many consumers would rather borrow them, especially if they are not sure they are going to like a particular book.

Next up was Matthew Sigman, cofounder of Tivity (New York), a company NJTechWeekly.com has been following for some time. Both Tivity’s founders are Manalapan natives, and Sigman said the company has a second office in Asbury Park.

Tivity matches people with sports activities in which they seek to participate, such as a pickup basketball game or an ad hoc game of racquetball. The site is the electronic version of someone saying, “Come play with me.”

Would-be players follow a location that is holding an activity, and those interested in playing in a game there receive a message letting them know how many people want to play. The application lets interested parties know there will be enough people at the venue to hold a game. The company is now housed at the NYU-Poly Varick Street Incubator in SoHo.

Jonathan Katz, CTO of Venuebook, a New York startup, pitched the company’s event-planning application. He said the firm is trying to break down the wall between event planners and venue managers. The software is a seamless way through which party planners can find appropriate venues for the events they want to organize. Venue managers can filter out qualified leads and handle the process online.

Discussing the business model, Katz said the system is free for event planners. They can find events, sign contracts and put down deposits online. Venue managers, however, must pay for software as a service (SaaS). The software lets them manage incoming leads, fill out contracts, send proposals and “even search for new events through a marketplace we have set up,” explained Katz.

“What we do differently is we handle the end-to-end management. We’ve been talking to some people in the corporate world, and they love it because they are basically accidental event planners — they have to book events all the time, but that’s not their full-time job. They like [having] the ability to choose their entire menu online and just put down a credit card,” Katz said.

Scott Watermasysk of KickoffLabs (Monroe Township) was up next. He said he and cofounder Josh Ledgard devised the concept for their company through wanting to find out which of their many startup ideas had traction. They needed a way to get some landing pages out quickly and easily and see how others responded.

The pair turned this idea into a product to help launch other businesses. Kickofflabs provides landing pages and email marketing to help large and small companies create customer leads.

“Our core goal is to make something so easy, e-commerce companies don’t need an IT department or developers to create these landing pages. We provide a rich set of templates. Once you select the template, it is really easy to change. You can choose a different background image, etc. All customers have to do is publish, and they are done,” Watermasysk said. The company has lot of built-in functionality designed to help customers sign up users, he added, and social sharing is a large component.

A great benefit of an e-commerce company’s using the KickoffLabs system is the customer intelligence data it gathers. Starting with a simple email address, the system is able to guess customers’ ages, the town they live in and the one in which they work, and then generate a user biography. The system also tracks which customers in an e-commerce site’s network are most influential.